August 26, 2017
The Arduino board is an amazing product with infinite possibilities as they are easy to use and affordable. If you are a beginner and want to get started in robotics then the line follower is a bot that you can lay your hands on. It is a simple robot built to sense the black line and run over it. It is constructed on a simple principle that when light falls on a white surface it is almost fully reflected and in case of black surface light is completely absorbed. 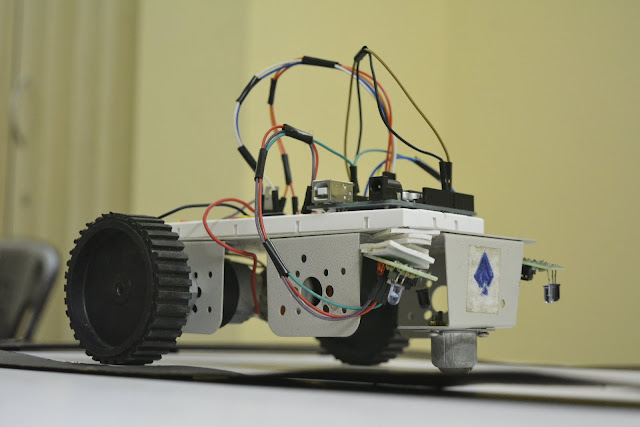 IR Transmitters and IR receivers also called photo diodes are used for sending and receiving light. When sensor senses white surface then arduino gets 1 as input and when senses black line arduino gets 0 as input. Arduino Uno is used for controlling whole the process of line follower robot. We use L293D motor driver IC which has two channels for driving two motors and a voltage regulator to get 5 volt for arduino. 9 volt battery is used to power the circuit. 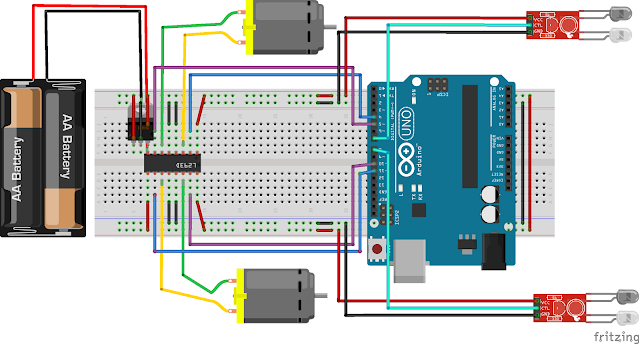 Popular posts from this blog

December 16, 2017
Detecting and avoiding obstacles has been a vital role that has been played by the bots that are created using Arduino. The table bot is a well known bot in the realm of small Arduino operated bot that are also easy to construct. It senses if there exists a base ahead of the path on which the bot currently is. The bot will turn and change its course whenever it reaches the edge of the table it is running on. It does that using the infrared sensor also commonly known as the IR sensors.


IR sensor is guided by the Infrared technology which addresses a wide variety of wireless applications. The main areas are sensing and remote controls. In the electromagnetic spectrum, the infrared portion is divided into three regions: near infrared region, mid infrared region and far infrared region. The basic concept of an Infrared Sensor which is used as Obstacle detector is to transmit an infrared signal, this infrared signal bounces from the surface of an object and the signal is received at the in…
3 comments
Read more

September 07, 2017
The world of Robotics is progressing by the minute. It's touching our lives in different ways every now and then. The ease of learning this skill has enabled people to be innovative and create new things daily. One such bot constructed is the self balancing bot which works on the principle of  inverted pendulum. It balances itself by counterbalancing the fall of the bot using motors, sensors and  arduino primarily.
To keep the structure in an upright position a feedback and a correcting element is essential. The feedback element is the gyroscope and accelerometer also known as the Inertial Sensor Unit collectively ,gives both acceleration and rotation in all three axis which is used by the Arduino to know the current orientation of the robot. The actuator block which drives the correcting element i.e. the motors and wheels, has two drivers that receive analog voltage signal from controller and produce current signal to drive the motors at the desired torque. As the robot tilts, a …
1 comment
Read more